Taking Restoration for a Test Drive: Results from a 10-year Experimental Study in Los Tuxtlas, Mexico

Taking Restoration for a Test Drive: Results from a 10-year Experimental Study in Los Tuxtlas, Mexico

By Anika Hazra, Department of Biological Sciences, University of Illinois at Chicago

Experimental restoration helps us to understand the effects of using different strategies to restore habitat as well as to determine which strategies provide the most desirable outcomes. It is particularly important that we be informed of what works best for tropical forest habitat since forests in the tropics are suffering the highest level of degradation, which in turn has a negative impact on the multitude of wildlife species that rely on these forests for their survival.

Henry F. Howe and colleagues from the University of Illinois at Chicago saw an opportunity to study the effectiveness of different restoration strategies simultaneously within an active cattle pasture in Los Tuxtlas, Veracruz. The research team established a set of experimentally-restored forest plots within 12 hectares of leased land in 2006. The land is to be leased for this long-term restoration project for 30 years in an arrangement with Benito Palacios, owner of the cattle pasture. The object of the study is primarily to observe the recruitment patterns of seedlings and the trajectory of forest succession within the restored plots. 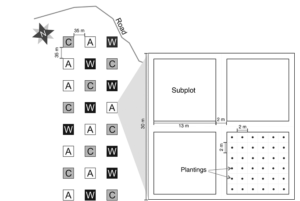 Much forethought and experimentation went into the planning of this restoration study. A categorical list of potential tree species to be planted was produced beforehand, including “good recruiters”, “good transplants” and “poor transplants” (Guzmán-Luna & Martínez-Garza 2016). The team also chose the species they would plant according to the level of variation in specific leaf mass (SLM) exhibited by a species, which indicates their resilience in early-successional habitats. The team planted a mixture of pioneer and late-successional species in each of their plots, hoping that doing so would help to prevent arrested succession at the early stages (Martínez-Garza et al. 2005).

It’s now been over a decade since the restored forest plots were created, and results from this long-term study are promising—despite reflecting the hard, unpredictable reality of habitat restoration. Unfortunately, a drought in the summer of 2007 killed 72% of the seedlings, only a year after they were initially planted (Martínez-Garza et al. 2013). After the seedlings were replanted, seeds initially showing up in the plots seemed to come mostly from wind-dispersed species (Martínez-Garza et al. 2009). However, at the five-year mark of the experiment there was greater recruitment of later-successional animal-dispersed species in the planted plots (De la Peña-Domene et al. 2013). In the same year 960 recruited seedlings of 44 species were recorded, with 96% of them not being planted species.

It appears that animals have played an important role in the recruitment of seedlings, as they were responsible for the dispersal and recruitment of more seedlings and more species of seedlings than wind (De la Peña-Domene et al. 2013). Birds and bats have been dispersing seeds into the plots, with bats dispersing pioneer species and birds dispersing later-successional species into the planted plots (De la Peña-Domene et al. 2014). Results from bird censuses conducted from 2007 to 2016 show an increase in the number of fruit-eating bird species and individuals appearing in the plots over time (Howe 2017).  Ocotea uxpanapana, a large-seeded tree species that is bird-dispersed, was found to be naturally recruiting in the plots, indicating that birds have been crossing open pastures to get to the plots where they find shelter under more developed canopies (De la Peña-Domene et al. 2016). 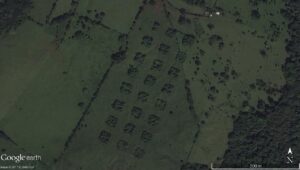 Satellite image of restored forest plots embedded within a diverse landscape that includes continuous forest, living fences and isolated trees as well as pasture. Nearby secondary forest is at least 90m from the plots to the south and southeast and nearby primary forest is at least 236m to the east. Image modified from Google Earth.

The forest plots are still quite young, and as the study continues we will learn more about the dynamics of tropical forest regeneration under various restoration strategies (planted vs. unplanted, planting different species). So far it seems that planting seedlings does help to attract animals—primarily birds—that disperse later-successional species from nearby forest. This long-term restoration experiment is providing valuable information that can and should be applied to large-scale public and commercial restoration projects (Howe & Martínez-Garza 2014). It would be useful to conduct similar long-term, multi-treatment restoration experiments at other locations to determine consistency of results and applicability to other habitat types. The major takeaway from this study so far is the importance of planting a diverse set of seedlings species to attract seed-dispersing animals and to create forest habitat that is resilient to environmental and land-use change.