Lessons from beneath the canopy: invest in human and social capital to catalyze restoration 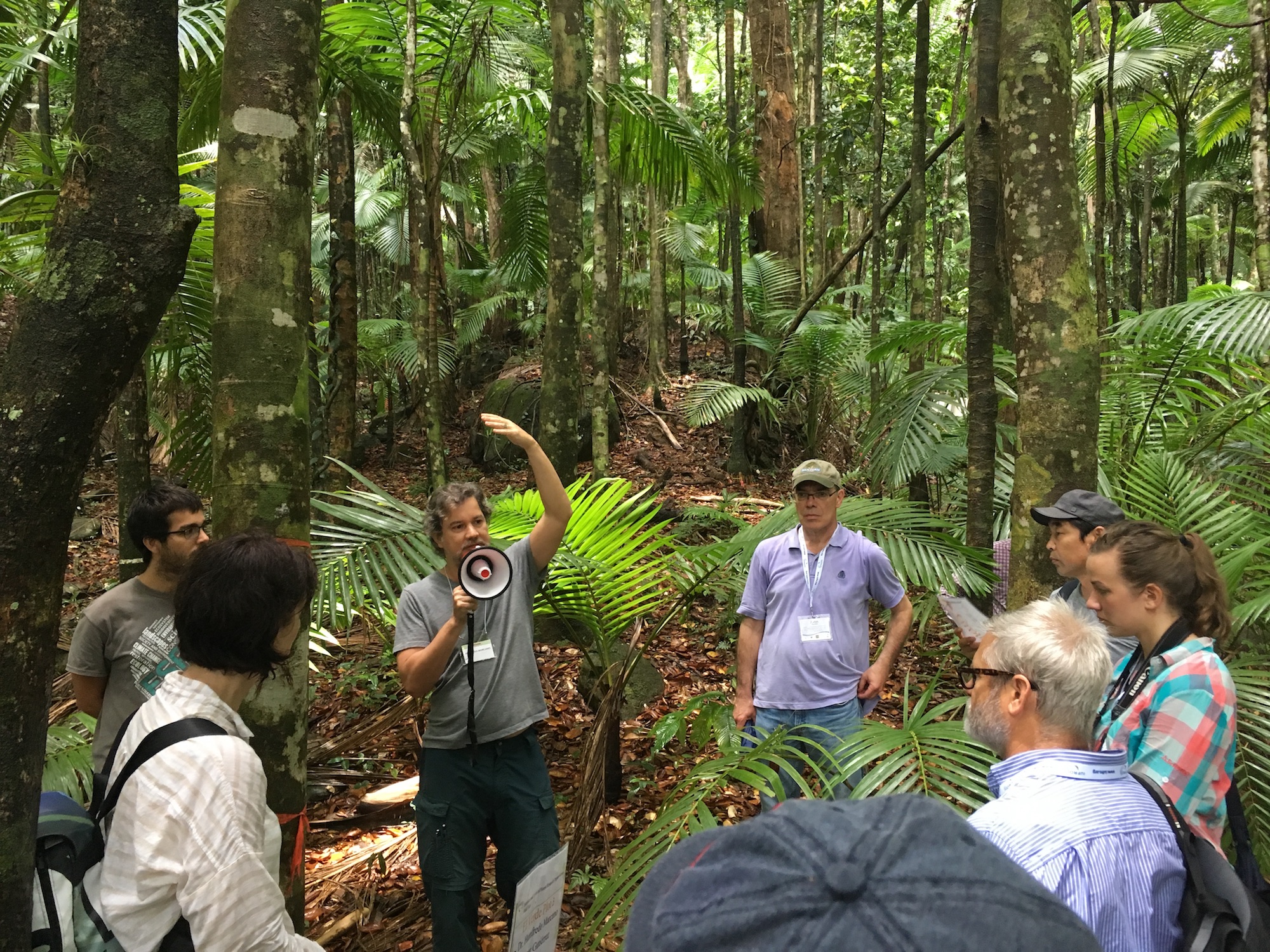 Lessons from beneath the canopy: invest in human and social capital to catalyze restoration

Over the sound of millions of raindrops pummeling broad leaves, a hardy group of foresters listened intently to United States Forest Service researchers.

30-meter-tall mahogany trees in El Yunque National Forest in Puerto Rico suspended a green canopy far above. Soaked but smiling, the group learned that these mahoganies were planted as part of a reforestation research project more than 80 years ago; making them part of the longest ongoing tropical forest research project on earth.

Forest and landscape restoration is what brought these researchers together in El Yunque, and Puerto Rico is an excellent place to see it in action. The island was almost completely deforested by the end of the 19th century by agriculture. Today, however, 62% of Puerto Rico is covered by secondary forest.

This particular mature mahogany forest is an accident. The trees, planted to test the viability of mahogany as a commercial timber species on the island, were never harvested partly because there was and is no commercial sawmill on the island. Small, portable, “artisanal” mills process the country’s meager timber harvest nowadays, turning rare toppled mahogany, tabonuco, and palo colorado trees into boards bound for musical instruments or the painted reliefs of Catholic saints.

Forest researchers gather beneath the canopy of El Yunque National Forest in Puerto Rico, the Western Hemisphere’s longest running forestry experiment, to learn about the science of reforestation and its contribution to climate mitigation.

More than the monetary value of trees

The lack of a robust market for timber on Puerto Rico calls into question a central assumption of much of the modern reforestation movement. Bastiaan Louman of CATIE, one of the forestry researchers under the canopy that day as part of the IUFRO conference Forest & Landscape Restoration Under Global Change, summed it up in a question he presented during the event: “Is it true that only the monetary value of trees leads to tree cover increase?”

Louman and colleague’s research in Costa Rica shows increased education and health as more important drivers of on-farm reforestation than the government’s long-standing payment for ecosystem services program (started in 1996). Over 50% of Costa Rica is now covered in forest, up from just 21% in 1987. Encouragingly, Louman et al. found that when economic development was accompanied by investments in social capital (like organizational capacity) and human capital (education and health), on-farm tree recovery is improved.

This backs up what we at EcoAgriculture Partners have found elsewhere. When enabling investments in social organizations, local institutional capacity, and health and well-being are paired and sequenced with asset investments in things like payments for ecosystem services, ecotourism operations, and certified sustainable production, the returns (environmental, social, and economic) on both types of investments are improved.

Understanding how to sequence those investments, and which investments will be most synergic with others, is not simple and can be virtually impossible (not to mention presumptuous) to do from afar. That’s why we recommend that national governments empower landscape-level governance platforms to set priorities, evaluate opportunities, and coordinate finance. In fact, one of the most valuable enabling investments public funders can make is in the social capital of landscape platforms to serve these roles. As CIFOR Board President and EcoAgriculture Fellow José Joaquin Campos Arce said in his keynote address to the knowledge-sharing workshop, “landscape approaches are social processes that enhance the total economic value of landscapes.”

While heavily forested now, this view to the coast from Yokahu Tower in El Yunque National Forest would have been almost devoid of trees in the 1920s, when it was covered by cattle ranches and sugar cane plantations. Natural regeneration is responsible for most of the forest restoration on the island.

Back in Puerto Rico, another kind of restoration success story demonstrated once again the power of human and social capital to catalyze restoration. Bosque Urbano de San Patricio is a unique forest ecosystem that pushed its way up between the remains of paved streets. It is composed of well-adapted introduced species like guanacaste (enterolobium cyclocarpum), flamboyan (delonix regia) and mango mixed with native pioneer species growing quickly in the shade beneath. It is completely surrounded by the city of San Juan, yet it provides habitat for the endangered Puerto Rican boa and Puerto Rican parrot, along with many other birds, reptiles and amphibians.

This dense tropical forest is growing on the site of a U.S. Navy residential area that was torn down in the 1970s. Thanks to the concerted efforts of local people, it is a triumph of forest restoration in the heart of the city of San Juan.

After the U.S. Navy closed and demolished a housing area for sailors here in the 1970s, Puerto Ricans could not decide what to do with the land. While they argued over its fate, and development proposals came and went for nearly thirty years, the forest grew. In the late 1990s, the new forest’s neighbors tapped into their social capital and organized to permanently protect this new forest park that had sprung up.

Now that forest is protected and managed by the Department of Natural Resources and the Environment, community involvement remains. Local artists and yoga instructors hold classes here. Weekly meditation sessions are held in the “Cathedral,” a particularly magnificent grove. Students from San Juan schools make regular field trips to learn about biodiversity, forest ecology, and conservation. Bosque Urbano de San Patricio also teaches the importance of social capital in creating a more diverse, healthy, resilient and enjoyable planet for all of us.

EcoAgriculture Partners is developing a Landscape Finance Opportunity Assessment Tool together with IUCN Netherlands that will help landscape initiatives match their investment needs, whether they need to address human, social or economic capital, with sources of finance.