Over six years, through a series of 12 workshops held in four countries, PARTNERS engaged 186 participants from the natural and social sciences, practitioners and educators. Participants came from 17 different countries (Argentina, Australia, Belgium, Brazil, Canada, Columbia, Costa Rica, France, India, Mexico, The Netherlands, the Philippines, Spain, the UK, USA, Vietnam) and represented many more through their work. We had a productive balance of established researchers and practitioners and those in early stages of their careers, facilitating mentoring and helping to build the next generation of reforestation researchers and practitioners. Forty percent of our members were senior researchers, 19% were PhD students and post-docs, 12% early-career researchers, and 30% held practitioner and other non-academic positions. 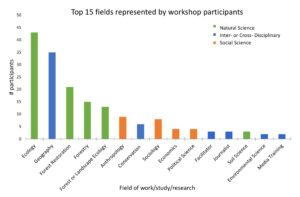 In addition to workshop participants, our network has engaged many others through co-authorship opportunities and social media (we have more than 1000 followers on Twitter), and  our mailing list which goes out to more than 400 people. The webinar series we co-hosted with ELTI were viewed live by over 150 people.

Our members represent a diverse array of fields from the natural and social sciences.

Our group includes researchers from around the world who work in tropical landscapes.

The main themes in our collective work, using the text from the ‘headlines’ or key message we developed for each publication.