The Piracicaba River Basin in the State of São Paulo, Brazil supplies water for irrigation, household consumption and industrial use for its 3.4 million inhabitants but also supplies drinking water for another 10 million people, including much of the city of São Paulo, due to a transposition system. Most of the basin was deforested in the 20th century to establish coffee plantations, which were gradually substituted by sugarcane, pasture, orange groves and silviculture. By 2000, only 20% of the original seasonal semi-deciduous Atlantic Forest cover remained.

With a legal mandate from Brazil’s Forest Code to restore 20% of the forest cover on private farms in this region, the high cost of planting trees poses a big challenge for this large-scale restoration effort. The cumulative costs of restoring forests through tree planting are well beyond state-level budgetary allocations. How can cost-effective interventions be planned at large spatial scales in this region and in other parts of the world?

One approach to reducing costs is to let nature help by leveraging the potential for natural regeneration. We used satellite imagery to identify locations where forests regrew naturally between 2000 and 2010 within the entire watershed and used this information, along with environmental and social indicators, to predict the probability of natural regeneration over the next ten years. We then calculated the costs of implementing restoration measures, based on these predicted probabilities, including land opportunity costs. We simulated the cumulative costs of restoration when areas with a high potential for natural regeneration were prioritized or when restoration was prioritized along riparian areas, as is currently required.

Our simulations showed that prioritizing natural regeneration increased the cost-effectiveness of carbon storage and landscape connectivity at the landscape scale.
This study represents a key advance in planning restoration scenarios that aim to increase native forest cover, improve conditions for wildlife, and store carbon in forest vegetation. With similar data collection, this approach can be used in other regions to map priority areas for low-cost restoration that leverage the potential for forests to restore themselves. 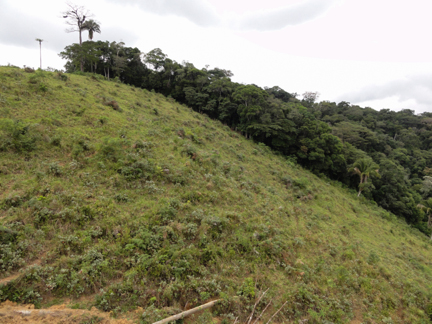 Photo: Pasture land with signs of natural regeneration in proximity of a forest remnant and in higher slopes.

The PARTNERS connection
This research was not originally conceived as a PARTNERS project but benefitted substantially from discussions on prioritizing natural regeneration during the October 2015 workshop. Data from the doctoral work of Paulo Molin provided baseline information for predicting the probabilities of natural regeneration and for simulating restoration costs at the landscape scale. We saw a possibility of using the same landscape dynamic model from the thesis to achieve spatially explicit probabilities of agricultural land use transition to forest.