Getting Help from Above: Enlisting Drones to Assist Natural Regeneration and Forest Restoration

The United Nations is calling for the restoration of forests to an area the size of India by 2030, and many nations have pledged to reforest vast areas to support this global endeavour. But, with nearly all flat, roadside land already firmly occupied by agriculture, most of the 350 million hectares being earmarked for forest restoration is likely to be in steep, rugged and largely inaccessible locations. How can forests be restored to such remote areas?

Encouraging and assisting natural regeneration may be a large part of the answer. But far away from roads, even basic tasks like site mapping, tending trees and monitoring progress become immensely challenging. Drones and their cameras, however, can go anywhere. This paper explored the potential of drones and the cameras and other tools they carry to automate site assessments, monitoring, maintenance of natural regeneration (particularly weeding) and species enrichment through aerial seeding.

The paper reviewed the potential usefulness of existing technologies to perform such tasks and explored the need for innovation. As this field is very fast moving, technologies have advanced considerably since the paper was published. Site surveys, using consumer drones with standard, on-board cameras have become almost commonplace. The development of ways to identify tree species from aerial images of their crowns is now well advanced, using both visual dichotomous keys and image filtering. Ecologists can now easily convert overlapping images from drones into 3D forest models, using new, easily accessible, structure-from-motion, software, enabling them to measure biomass increase and carbon accumulation as forests regenerate.

Consumer drones now come with collision-avoidance sensors in all directions as standard, so they can be flown close to or within the forest canopy safely and their battery life (and therefore their flight range) continues to increase. Most importantly, drone prices continue to fall, such that restoration practitioners and researchers can now buy an off-the-shelf drone, with an advanced camera and all-round, collision avoidance for about 1,500 US$. Not surprisingly, training courses that teach ecologists how to fly drones are now often oversubscribed, as it becomes clear that such technologies will play an increasingly important role in the planning, implementation and monitoring of forest conservation and restoration projects around the world. 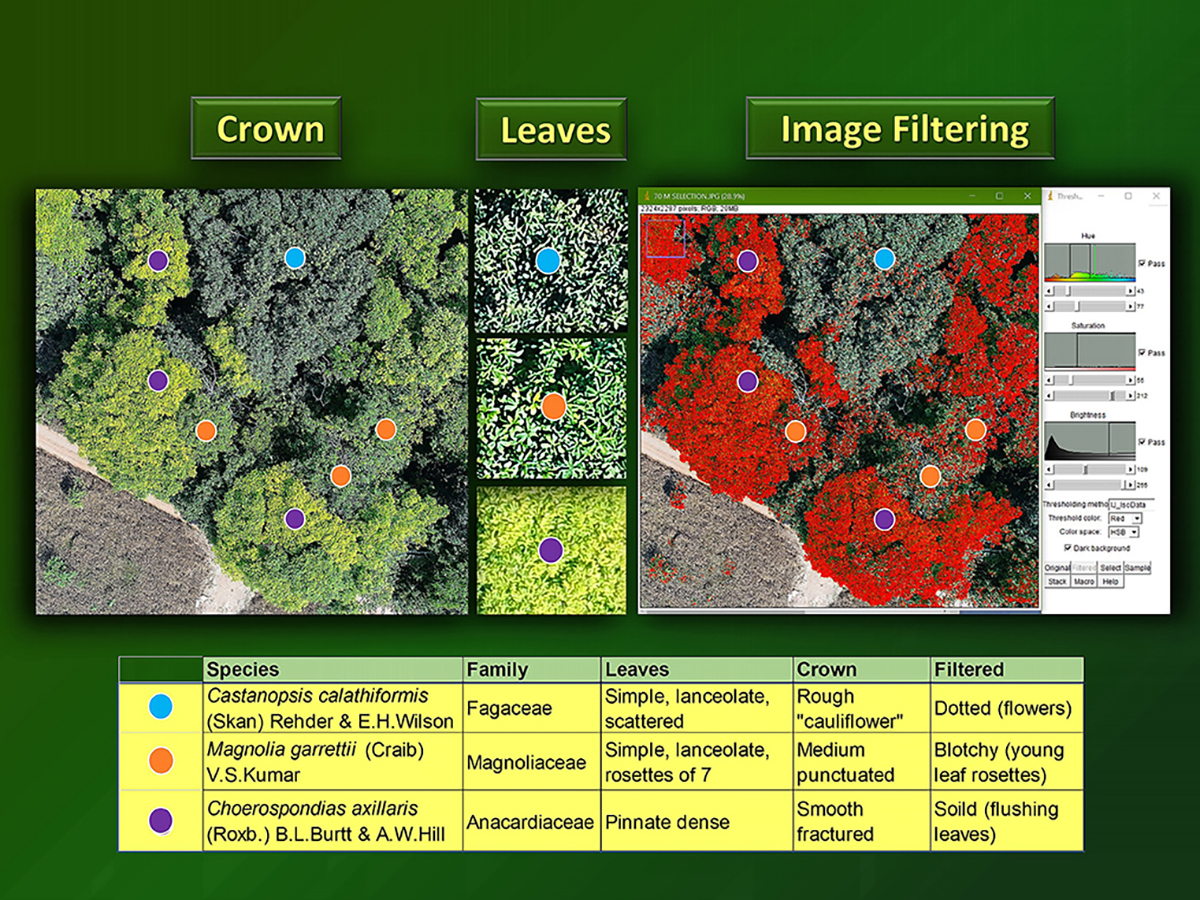 Recognizing tree species in a restored forest plot from 50 m above the ground, using a consumer drone with a 20-megapixel camera, an automated flight controller and open-source, image-filtering software. Currently, traditional, visual, dichotomous keys are combined with manual image filtering, but with the recent release of accessible AI tools by the major tech companies, it’s only a matter of time before species recognition becomes fully automated.

The PARTNERS connection
This paper was a contribution in a special issue in Biotropica on “The Role of Natural Regeneration in Large-scale Forest Landscape Restoration: Challenge and Opportunity” that was organized by PARTNERS based on a Symposium held in Rio de Janeiro in November 2014. As the symposium focused on South and Central America, this was one of several papers solicited to include research in the Asian and African tropics.