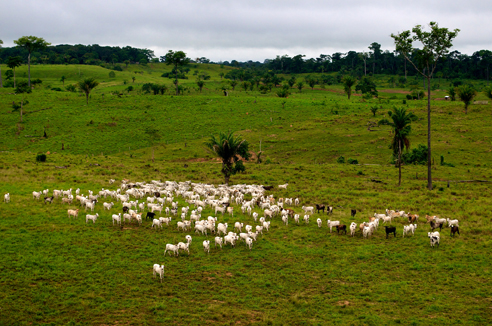 By Alvaro Silva Iribarrem, researcher in the IIASA Ecosystems Services and Management Program.

Restoration of degraded ecosystems is an exciting and relatively new way of looking into the conservation of natural capital—the world’s natural assets, including soil, air, water, and all living things. For one, the success of restoration is more readily verifiable than, for example, avoided degradation. Further, it increases the landscape’s resilience: natural areas can be placed around agricultural crops, increasing their yields by providing habitat for pollinators and therefore increasing pollination, protecting them from natural disasters, and improving the provision of important ecosystem services for human wellbeing.

These services include removing CO2 from the atmosphere (which contributes directly to climate change mitigation); ensuring that more sediment is filtered from the rivers (which reduces the risk of landslides and floods); and providing habitat for a large diversity of species. For scientists, it feels like being at the head of the counter-offensive: it is us, humans, finally doing something not only to slow our seemingly unstoppable degradation of the environment, but to actively start pushing it back.

Restoring an ecosystem to its original state can be an expensive endeavor, but tropical rainforests are very resilient. For example, even after centuries of extensive use of the Brazilian Atlantic Forest, which has been reduced to a tenth of its size, in many places it would still grow back to much of its original state in a manner of decades, if allowed to do so. For such ecosystems, natural regeneration represents an extraordinary opportunity to enable restoration at scales that would otherwise be cost-prohibitive.

In places like the Paraitinga watershed, in the countryside of São Paulo state, most of the original forest has long been cleared, and replaced, predominantly, by small dairy farms. After over a century of careless land use, large areas of the converted landscape has degraded to the point where yields are so low that farms are barely viable. The lack of forest cover has led to frequent floods. The worst of the recent ones, in 2010, destroyed most of the historical city of São Luiz do Paraitinga, with a population of 11 thousand inhabitants.

In a couple of recent publications, we made a comprehensive effort to include the natural regeneration of that watershed’s native forest as part of a bigger plan for more sustainable development of the region, one that would increase its resilience to this kind of disaster.

Starting from a landscape approach, we looked at the potential for grass growth in the region, and concluded that it was possible to accommodate all foreseeable future demands for cattle production and still make space for the restoration of a large area in the watershed. Sustainable intensification of current pasture is key to avoid the economic losses that could otherwise follow the land shortage caused by such a large-scale restoration. It would also help to gain the farmers’ acceptance. By producing more in a smaller area, they could let go of the degraded areas they currently use, allowing the native forest fragments nearby to spread.

In our regeneration scenario, we assume that around 24,000 hectares of pastureland that is presently abandoned in the watershed will be allowed to undergo natural regeneration in the next 20 years. This naturally occurring forest regrowth would sequester 6.2 million tons of CO2 from the atmosphere. Additionally, it would reduce sediment load into rivers by 570,000 tons annually, bringing water purification costs in the area down by 0.37 dollars per year per hectare restored. Finally we showed that restoration of even this relatively small area would be enough to significantly increase habitat availability for all species, particularly for those which travel between forest fragments.

To understand the difficulties farmers face in improving productivity, we conducted interviews and focus groups with them. We found that the tendency to keep to their old, low-producing, land-extensive ways, is less related to a resistance to change, and more to a lack of technical knowledge and the means to make the upfront investments needed to switch to a more productive system. Credit for investment is available and cheap in the country, but only a small number of farmers in the region risk taking it. Technical assistance is key to tap into these resources and enable the necessary improvement of the watershed’s production. The conditions for unlocking large-scale forest regrowth, not only in the Paraitinga watershed but in many similar landscapes in the country, are in place—they need only to be implemented properly.

This post was originally published on the IIASA blog, Nexus:  http://blog.iiasa.ac.at/2016/12/05/natural-regeneration-for-sustainable-development/