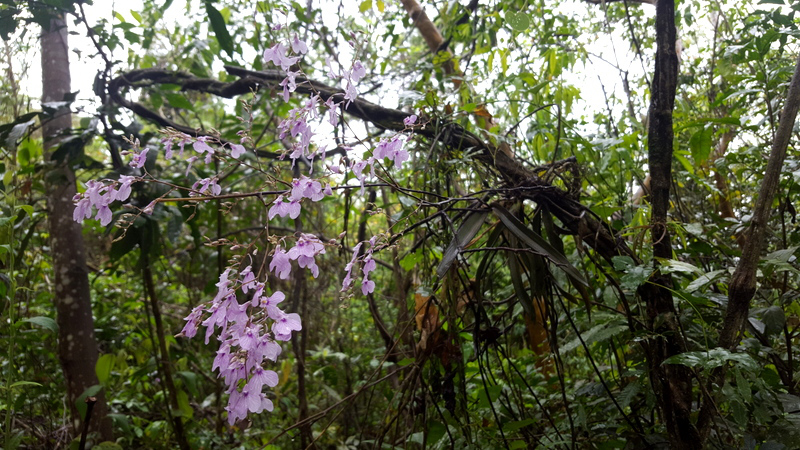 CCSD restoration ecologist and PARTNERS member Leighton Reid spent 10 days collaborating with scientists and students in the Tropical Silviculture Lab (LASTROP) at the University of São Paulo. Epiphytes were a central theme of the visit.

Vascular epiphytes are plants that live non-parasitically on other plants. Readers from the tropics will be quite familiar with some epiphytes, like the ubiquitous Tillandsia of Neotropical powerlines, but temperate zoners will have seen many epiphytes as well, at the florist, the botanical garden, and the mall. These plants are incredibly diverse; by one estimate, epiphytes make up 9% of all vascular plants worldwide. But epiphytes also face serious challenges in today’s world. Habitat loss and overharvesting threaten some epiphyte species with extinction. Many epiphytes also have a hard time recolonizing new habitat in regenerating forests, but new studies on epiphyte restoration could help.

I spent the past 10 days in the State of São Paulo learning about epiphyte ecology, conservation, and restoration from students and scientists at the University of São Paulo’s College of Agriculture (Escola Superior de Agricultura Luiz de Queiroz). This part of Brazil was once covered in semideciduous tropical and subtropical forests, which hosted about 150 vascular epiphyte species. Today, only ~15% of the forest remains, but there is a large effort underway to restore 15 million hectares (nearly 58,000 square miles) of it by 2050.

ESALQ maintains shade house with more than 3,000 orchids, including (A) Cattleya loddigesii, (B) C. forbesii, and (C) Arpophyllum giganteum.

Frederico Domene is a doctoral student studying epiphyte reintroduction in restored Atlantic Forest. Like his advisor, Pedro Brancalion, Fred’s interest in epiphyte restoration stems from a passion for orchids. He grows a variety of them at his house in Piracicaba, preferring true species over horticultural varieties.

Fred picked me up in his black pickup, “mamangava”, and took me on a tour of several tree plantations where he has been developing methods for reestablishing populations of epiphytic orchids, bromeliads, cacti, and aroids. Fred’s basic procedure involves collecting epiphyte seeds (or purchasing small plants, in the case of orchids), growing them out in a nursery, and then attaching them to trees using twine or plastic. He started his work in 2010 and has been monitoring his plants, and reintroducing new plants, every year since. He uses a ladder to put the orchids up high, out of easy reach for would-be poachers.

Late August is mid-winter in São Paulo, and while it doesn’t get particularly cold, it is quite dry. The restoration plantations were crunchy with desiccated leaves and twigs. These are harsh conditions for epiphytes, which do not have the luxury of soil to buffer to their roots from the sunlight and dry air. Some of Fred’s epiphytes have withered and died, especially during a 100-year drought in 2012. But others are thriving, thanks to special adaptations, such as the velamen of orchid roots, which wicks up rainwater when it drips down the tree trunk during storms. Many individuals have started fruiting and flowering, a good sign for the future viability of these reintroduced populations.

Epiphyte reintroductions in restoration plantations. (A) A reintroduced festoon of bromeliads, orchids, and cacti. (B) A fruit-bearing orchid (Cattleya forbesii), six years after reintroduction. (C) This reintroduced cactus (Epiphyllum phyllanthus) seemed to grow better in tree forks than on vertical stems, as did an aroid, (D)Philodendron bipinnatifidum. (E) Two tiny cacti have germinated in this direct seeding experiment, using seeds enrobed in paper discs. (F) Even where epiphytes have dessicated and died, experimental infrastructure continues to enhance epiphyte development; here a small bromeliad (Tillandsia recurvata) uses a piece of natural twine as a foothold.

To identify the key challenges for epiphyte restoration, it is also important to study epiphyte recolonization in naturally regenerating forests. Alex Mendes, an undergraduate researcher at ESALQ, is doing just that. On an unseasonably rainy morning, Alex, Fred, and I visited three regenerating forests near the sugar town of Rio Claro. We ducked under barbed wire fences and wandered through low, dense vegetation where Alex is systematically searching for vascular epiphytes. Two forests had rather few epiphytes – mostly generalist bromeliads – but one forest had a high density of orchids, which happened to be flowering spectacularly on the day we visited. Based on historical aerial photos, Alex knows that these three forests are at least 20 years old. They are part of a network of 75 sites that he will ultimately search for epiphytes. By the end of his undergraduate program, Alex hopes to be able to predict where epiphyte communities will regenerate on their own, and where they will need more assistance.

This secondary forest near Rio Claro might have felt like your average overgrown Psidium guajava patch had it not been  decorated with dozens of Ionopsis sp. orchids.

These are early days for learning about epiphyte restoration, and there is still a lot of work to be done. The projects that I visited in Brazil are making headway, complementing our research in Costa Rica. It remains to be seen under what circumstances epiphyte reintroductions will be most successful. Perhaps an even more important issue will be convincing funding agencies and land managers to think beyond trees.

Fred Domene and Alex Mendes are making strides in the ecology of epiphyte reintroductions and community assembly. Here, they pose with a reintroduced bromeliad (Billbergia zebrina) at Anhembi experimental station.