The Selva Lacandona is one of the largest areas with highly diverse tropical rainforest in Mesoamerica. Here, more than a thousand years ago, the Mayan civilization developed agricultural systems that maintained populations over 50,000 people in ceremonial cities. This human footprint caused deforestation with important negative ecological consequences. Centuries later, however, the forest naturally regenerated and the Selva Lacandona now embraces an extraordinary diversity of plants and animals. 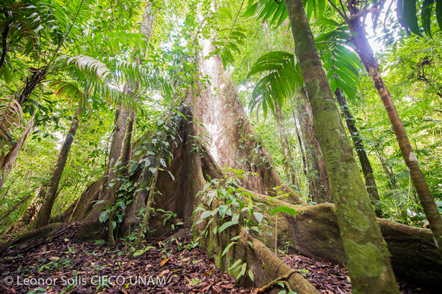 During the 1970’s the Government of Mexico provided land of the Selva Lacandona to people from different places of the country, specifically, in the region of Marqués de Comillas, starting a new wave of forest conversion to agriculture. Forest conversion is now done with technological tools and agriculture that the Mayans did not have, such as agrochemicals, heavy machinery, extensive cattle ranching and large monoculture of perennial plants (including the African oil palm). About 70% of the old-growth forest has been lost in less than 50 years. Soil degradation has occurred, particularly at sites where naturally-poor soil, frequent use of fire and agrochemicals, and livestock activities coincide. Furthermore, degraded lands often are infested by aggressive weeds, which impede agriculture and forest natural regeneration.

A landscape in the Selva Lacandona; to the left of the Lacantún River is the Montes Azules Biosphere Reserve.

The Marqués de Comillas region (delimited by the river and the border of Mexico with Guatemala – in yellow). Below, rainforest cover (green dark) change after 14 (1984) and 44 years (2014) since human colonization in Marqués de Comillas. (Google Earth images provided by Esteban Martínez)

Stories like this repeat over the tropics around the planet, contributing to the major losses of biodiversity and of invaluable contributions of tropical forests to human wellbeing. Human population is growing, soon reaching 8,000 million people, along with the demand for agricultural products. Thus, humanity faces the big dilemma of how to conserve and restore diverse tropical forests under the increasing demand for agricultural food.

Students and researchers from the National Autonomous University of Mexico (UNAM) and Wageningen University (Netherlands) conduct studies in Marqués de Comillas, exploring ways to reconcile conservation, forest restoration, and agricultural production. We found that small-scale agricultural practices (less than two hectares), which do not use agrochemicals or fire and maintain a high coverage of native trees, promote forest regeneration when fields are abandoned. Examples of these uses are agroforestry and silvopastoral systems, which combine local forest biodiversity with agricultural plants of societal interest. In contrast, forest fails to regenerate in abandoned fields where agriculture included frequent use of agrochemicals, fire and machinery, low or no tree coverage, and was extensive (> 10 hectares), such as in cattle pastures and plantations of African oil palm. The studies further show that to ensure high levels of biodiversity and preserve the potential for natural forest regeneration, it is critical to maintain large proportions of forest cover (more than 50%) in the landscape. Such agricultural mosaic landscapes can offer a wide range of forest products, and ensure the persistence of ecosystem functions and services, which are important for climate regulation, maintenance of soil fertility, control of agricultural pests, provision of biotic pollination for crops, and conservation of freshwater sources, among other benefits for human well being.

The PARTNERS connection
Our results were presented in the symposium on “Low-cost restoration via natural regeneration”, organized by PARTNERS in Rio de Janeiro, Brazil, in 2014, and published in the Special Issue of Biotropica “The Role of Natural Regeneration in Large-scale Forest and Landscape Restoration: Challenge and Opportunity” organized by PARTNERS in 2016. More information can be found in this short video (only Spanish):