In 2013, a new high-resolution view of the dynamics of the world’s forests emerged with the publication of a study on global changes in forest cover based on satellite imagery from 2000-2012. What became known as “the Hansen data set” provided evidence of where in the world tree cover was lost and where it was gained. “Forest gain” in the Hansen study is actually “tree-cover gain,” which goes a long way toward understanding what has been happening globally with the replacement of natural forests with various forms of industrially planted tree cover, including short-rotation pulp, rubber, and oil palm. 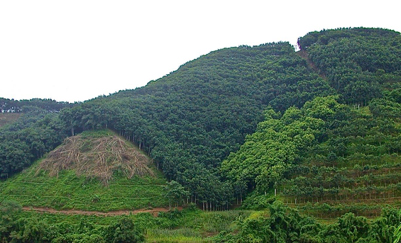 In this study, we examined forest cover changes as summarized in the Hansen data set, through the lens of forest transition theory, which aims to explain historical cases where net loss of forest cover is followed by sustained net increases in forest cover. Our analysis showed that the 18 countries with net increases in tree cover from 2000-2012 had smaller proportions of their populations employed in agriculture and exhibited slower rates of rural population growth during the 2000–2005 period. These countries showed two geographic clusters: a group of post-Soviet sphere countries (Bosnia, Cuba, Moldova, Hungary, and Serbia) and a group of semi-arid or arid countries (Cape Verde, Egypt, Palestine, Tunisia, and Iraq). Expanded tree cover associated with high yields for cereal crops and small populations of cultivators suggests a forest transition dynamic, in which urbanization and industrialization promoted long-term expansion of tree cover on land with low agricultural value.

A striking finding of our analysis revealed regions characterized by both high losses and high gains of tree cover during the beginning of the 21st century, suggesting either cycles of industrial-scale tree planting and subsequent harvesting or areas of natural forest loss followed by establishment of tree plantations, such as oil palm (which is included in Hansen’s study as tree cover). At global scales, and also within temperate and tropical forest regions, countries with higher rates of tree cover loss (deforestation) also have relatively extensive areas of new tree cover (reforestation). We describe these dynamics as a “treadmill” as opposed to a typical forest transition pattern, as they do not reflect simple gains in tree cover on abandoned croplands and pastures. Rather, they reflect an unprecedented global-scale expansion of markets and supply chains for wood products and for edible oils.
Our analysis highlights a global link between preceding tree cover losses, humid climates, and subsequent tree cover gains. New tree cover in this dynamic is dominated by monoculture plantations rather than natural forest cover. These changes pose serious negative consequences for the conservation of biodiversity, which requires diverse habitats present in native forests of varying age. These considerations add important nuance to forest transition theory, which needs to incorporate effects of reforestation on the quality and longevity of new tree cover as well as the underlying motivations and policies that drive tree cover expansion.

The PARTNERS connection
The idea for this paper was presented by Tom Rudel during at the first PARTNERS workshop in May 2014. An interdisciplinary working group formed to conduct the research and synthesis based on the Hansen data. The group managed to incorporate a wide set of issues into the paper, providing a novel perspective on 21st century forest transitions, which has set the tone for later works of the PARTNERS Forest Transition working group.