Yes, in many places forests are coming back. But even while we, land-use scientists could assure that forests are regenerating in montane areas of Tucumán, we could not specify the extension of the process, or whether it exceeds deforestation, today’s dominant land-use change at different scales. That is how quantifying reforestation in Tucumán was immediately incorporated into the short-term to-do list.
Compared to deforestation, reforestation has received much less attention from academics, the media and the general public. This is despite the fact that it is often seen as an opportunity to mitigate the negative consequences of forest loss, such as global warming, the loss of biodiversity, and of the products and services forests provide, from timber to the supply of clean water. But how much of an opportunity reforestation is will widely depend on its extension, persistence in time, and of the ecological characteristics of these reforests, among others. The good news is that a relatively recent regional analyses of reforestation show that it has increased in the last decades, and that it involves large extensions of land. As a further step to understand regional reforestation, here we asked: where, in Latin America in the Caribbean, are the regions with high, continuous, and persistent reforestation rates, that we called “reforestation hotspots”, and which biophysical and socioeconomic characteristics unite and distinguish them?
Using remote sensing data from satellite imagery, we identified 15 reforestation hotspots of sustained forest growth in Latin America in the Caribbean. We then grouped these in 5 clusters according to their biophysical and socioeconomic characteristics: “Urban lowlands” (Costa Rica/Panama, Atlantic Forests, Cuba, and Venezuela Coast); “Mountainous populated areas” (Colombian Andes, Central-America Pine Forests, Southern Mexico & Guatemala, and Dominican Republic & Haiti); “Rural highlands” (Southern Tropical Andes, and uplands of south Ecuador-north Peru); “Rural humid lands” (Roraima, Cerrado, and Beni) and “Rural dry lands” (Caatinga and Pantanal & Paraguayan Chaco). Interestingly, we found that different biophysical and socioeconomic contexts can equally give rise to important reforestation events. However, the benefits and beneficiaries of such reforests very likely vary according to those contexts, and local, finer scale studies are much needed to fully understand the opportunities that these reforests bring, both to nature and people.

The PARTNERS connection
This study resulted from a workshop held at University of Puerto Rico during February, 2018, among the authors of the paper, funded by PARTNERS. Some of the ideas that led to the workshop emerged from a former workshop held at Connecticut, in 2014, were some of the authors participated.
Figure 1 from the paper: “Reforestation hotspots of Latin America and the Caribbean (left side)…Graduated color pallet indicates the amount of net reforestation between 2001 and 2014 per hexagon (km2): 0–50 (light); 50–200 (medium) and >200 (dark).” 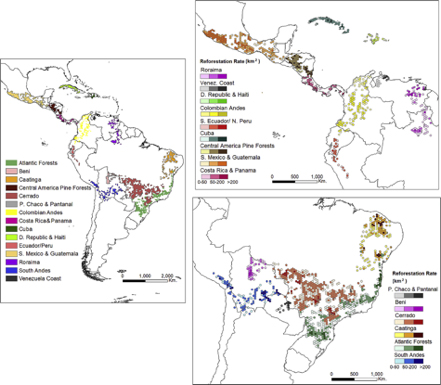